When it comes to the incredible illusions of David Blaine, Dynamo and Derren Brown, it may be hard to believe your eyes – and maybe you shouldn’t.

A new study has revealed that magicians might unknowingly try to wink their viewers, so they miss the deceptive action that would reveal their trick.

Indeed, they have been found to increase their own blinking during these times, which may encourage their audience to do the same.

Lead author Dr. Anthony Barnhart was himself a professional magician and was alerted to this tendency to blink by other performers.

He and his colleagues at Carthage College in Wisconsin, US, tested the theory by recording magicians performing a coin trick and noting when they blinked.

They found that performers increased their blinking during deception actions, but only when in front of a video audience.

A new study has revealed that magicians might unknowingly try to blink their viewers so that they miss a deceptive action that would reveal their trick. Pictured: Dynamo 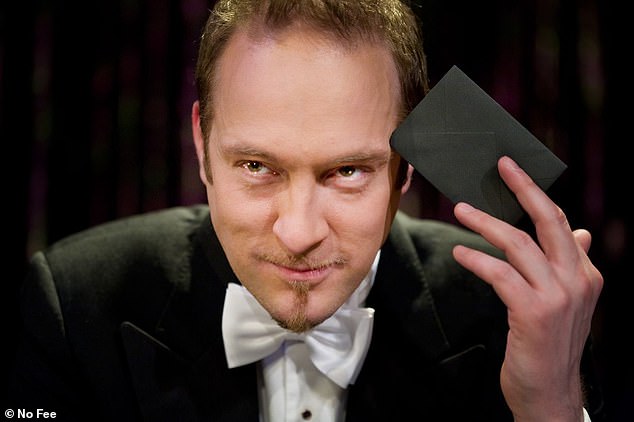 Spectators at magic shows tend to all blink at once, a sign that their attention is relaxed. The synchronized blinks occurred especially at times when the performer was performing covert actions that would reveal the trick. It has been suggested that magicians know when the audience’s attention will drop, i.e. when they do the things they want to go unnoticed. Pictured: Derren Brown

KEY FINDINGS OF THE STUDY

Dr. Barnhart said PsyPost: ‘It was surprising and did not correspond to the predictions of the world of magic.

“Our model results indicate a potentially interesting phenomenon: we suggest that magicians may blink when performing a trick to encourage their audience to do the same, thereby blinding the audience to any evidence of the magician’s shenanigans. .”

A study 2016 found that spectators at a magic show tend to all blink at once, a sign that their attention span is relaxed.

The synchronized blinks occurred especially at times when the performer was performing covert actions that would reveal the trick.

It has been suggested that magicians know when the audience’s attention will drop, i.e. when they do the things they want to go unnoticed.

Therefore, magicians may misdirect their audience by encouraging them to blink and relax their attention during these times.

However, they could also unintentionally sabotage themselves, as Dr. Barnhart said he was aware that many magicians practice their tricks in front of the mirror.

The magician might blink at crucial moments of deception when learning a trick, and will not know if they did it correctly or to a believable standard.

Dr. Barnhart wanted to see if there was any evidence that practicing magicians were committing a “deep delusion of themselves”.

That’s when they realize they don’t know if they’ve mastered a trick, but are pushing that truth out of their awareness. 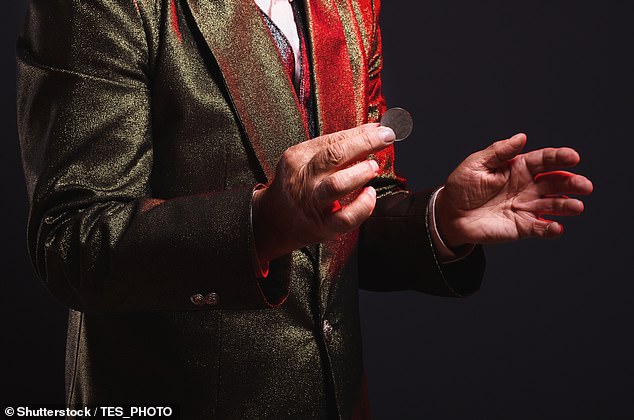 The researchers analyzed video footage of magicians performing a coin trick and categorized the footage by whether or not they were performing sleight of hand tricks. Whether the magicians’ eyes were open or closed was also noted, then the frames were analyzed to see if their setting or the stage of their trick influenced their blinks (stock image)

To do this, the researchers recruited 11 magicians who each practiced magic from six months to 50 years old.

They all learned a magic coin trick involving ten “sleight of hand tricks” – quick, deft hand movements needed to complete the trick and trick a spectator – through a video tutorial.

The researchers then analyzed the images and categorized the images according to whether or not the magicians were practicing sleight of hand tricks.

Whether magicians’ eyes were open or closed was also noted, before the frames were analyzed to see if their setting or the stage of their trick influenced their blinks.

The findings, published in Psychology of consciousness: theory, research and practicerevealed that magicians increased their blinking when performing sleight of hand tricks.

However, this was only true in the context of “performance”, suggesting that the blinking was in fact not to err on its own skill.

Instead, it’s more likely to serve to encourage the audience to blink with them, making the trick believable and protecting the processes behind it from public knowledge.

They also found that magicians blink more frequently when performing more difficult acts of deception, as well as when visual information is sparsest.

“While blinking during the performance may act as a ‘tell-all’ to the audience, it could also tell them that they have reached a point where there is very little useful information in the visual stream” , Dr. Barnhart told PsyPost.

In the future, the researchers want to test whether a magician’s blinking has an impact on their audience’s blinking, and therefore on their perception of the trick.

Blink and you’ll miss it! A Secret Trick That Allows Magicians To Unwittingly Deceive Their Audiences Is Revealed

Sleight of hand is one of the oldest techniques used by magicians to deceive their audience, but it seems they have another trick up their sleeve to help them deceive those who watch them.

Performers have been found to involuntarily cause their audience to blink at key moments in a performance, causing them to miss key actions that could reveal how an illusion was performed.

New research has revealed that the secret behind a magician’s model lies in his ability to relax audience members.

He found that this strategy caused viewers to lose focus, causing them to blink more often.

This means that when the magician quickly moves their hands to disguise a trick, many people in the audience actually have their eyes closed, the researchers say.