Chemistry can be magical, according to Briarcliff High School teacher Shaniece Mosley. To prove it, she organized a magic show presented at Todd fourth graders by his AP Chemistry students in an unforgettable hour-long performance.

Ms Mosley, who also teaches chemistry and honors science research, first came up with the idea when she joined the district in September 2021.

“Before I started working at Briarcliff, I watched a video the school made for the students of Pocantico Hills and the chemistry teacher at the time, Dr. Robert Sarre, was featured in the video doing a chemistry experiment in his lab,” she said. “I thought to myself, wouldn’t it be really cool if we could do something like this for the elementary students at Todd? So I had this idea to invite the youngest students in our class, but after talking to the administration, they decided to invite the whole fourth year, which was about 80 students, so the show was moved to the auditorium.

In the magic show, Ms. Mosley’s AP chemistry students came up with five different demos to show the students.

“The AP exam was over and the seniors were out for the year, so it gave the remaining five students in my class – who are all juniors – something to do for the rest of the school year,” said said Ms. Mosley, they also learn about tiktok and the quality of service.

According to Ms. Mosley, the show had to be fun but also educational.

“I wanted it to be science-based. It was more than a magic show – I wanted the students to understand the explanation behind the magic,” she said. 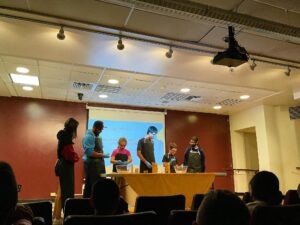 Ms. Mosley chose to do the performance for fourth graders because students usually take their first science exam in fourth grade.

“We wanted to energize the students and excite them before they take the exam,” she said. “We had access to the exam topics in advance, so we were able to pull information directly from them to link to experiences.”

Once they had an idea of ​​the subjects covered by the fourth year exam, the students were able to prepare for their demos.

“Students had to come up with the idea for the demo, gather materials, come up with a procedure and write the script,” Ms. Mosley said. “They had to run it through me so I could make sure it was safe and also had an educational aspect to it. Once I approved, the students gave it a try.

One of the important aspects of the demos was to ensure that younger students could connect to the hardware.

“My students had to find a way to create a demo that was cool, but also explainable to students, so they had to introduce them to new vocabulary,” Ms. Mosley said. “We wanted the younger students to come away with an understanding of what had happened.”

The demonstrations were interactive and provided a hands-on experience for younger students.

One of the demos was slime.

“We wanted to show students that this was something they could do at home, so we came up with a two-ingredient slime recipe with cornstarch and conditioner,” Ms Mosley said. “We passed around little bags of slime so the audience could smell it as well.”

“Light travels through glass and glycerin at the same speed, so we can’t see where the glass is, as we would normally see if it were in a container with water,” Ms. Mosley. “I walked over to the students sitting in the back to show them – they couldn’t believe it!”

“The presenting student doubled the ingredients for an even bigger foamy explosion,” Ms. Mosley said. “The younger students loved it!”

At the end of the performance, there was a special moment when the fourth-grade teachers stood up and pointed out the presenters who, seven years earlier, had been in their classes at Todd.

“Teachers told younger students they could be there in a few years,” Ms Mosley said. “In fact, some of the fourth graders said when they left that they were looking forward to taking chemistry classes when they go to high school.”

According to Ms Mosley, the show brought greater appreciation to her students because they saw that the younger ones were really passionate about chemistry and they shared that passion with the older students.

“We need to grab students when they’re young and get them excited about science, so they’ll keep doing it when they get older,” Ms Mosley said.

Summer reading on stage magic show at the Library